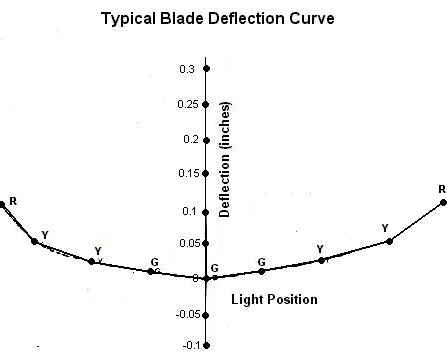 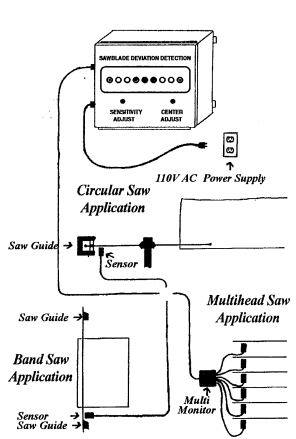 When either a bandsaw or circular saw is properly set up and properly operated, the blade will consistently run in exactly the same position. If the blade moves away from that set postion, that is called blade deviation. The Sawblade Deviation Detector (also referred to as AccuraCut) will help you spot that deviation from expected position as the cut is occurring so that you can take corrective action immediately.

How does the unit know where the blade is? does it actually touch the blade?

No, part of the unit comes in direct contact with the blade. The system measures the position of the blade by noting its effect on a pulsating electromagnetic field. This way, it "sees" only the blade itself and is not affected by word chips, cutting fluid, or any other non-metalic substance between the blade and the detector.

There are three main components to the complete system: the sensor, which is a small cylindrical object mounted near the blade; a controller display unit which is typically mounted in the sawer's cab; and a data cable which connects the other two components together. We also provide a small bracket for mounting the sensor and (optionally) any extra cable needed to extend the distance from the sensor ro the controller/display unit.

Yes. An optional remote light set can be connected to a special output port on the side of the unit. These lights can be placed in the maintenance room, filing room, or other location and will exactly mimic the main lights on the controller display unit. There is also another output port on the AccuraCut which provides an analog signal proportional to deviation which can be record on an oscilloscope or strip chart recorder for later analysis.

In most cases, installation of the Accuracut is very straight forward and can be handled by your own in-house maintanance personnel. You simply mount the sensor near the blade either just below the upper guide, or just above the lower guide; install the controller display unit in the sawyer's cab and connect it to 110V input power. You then connect the two components using the cable provided. Onsite installation is available. Call to schedule Jeff Miller Inc. service.